This month sees the launch of the new Magento Marketplace, the official extension store for Magento 1 and 2. It's surprising that this was launched quietly when refreshes in the past have had quite the fanfare. MagentoLive UK would have been a great opportunity to talk about it. However, for the most part, the update is a re-platforming and design refresh rather than re-envisioning. 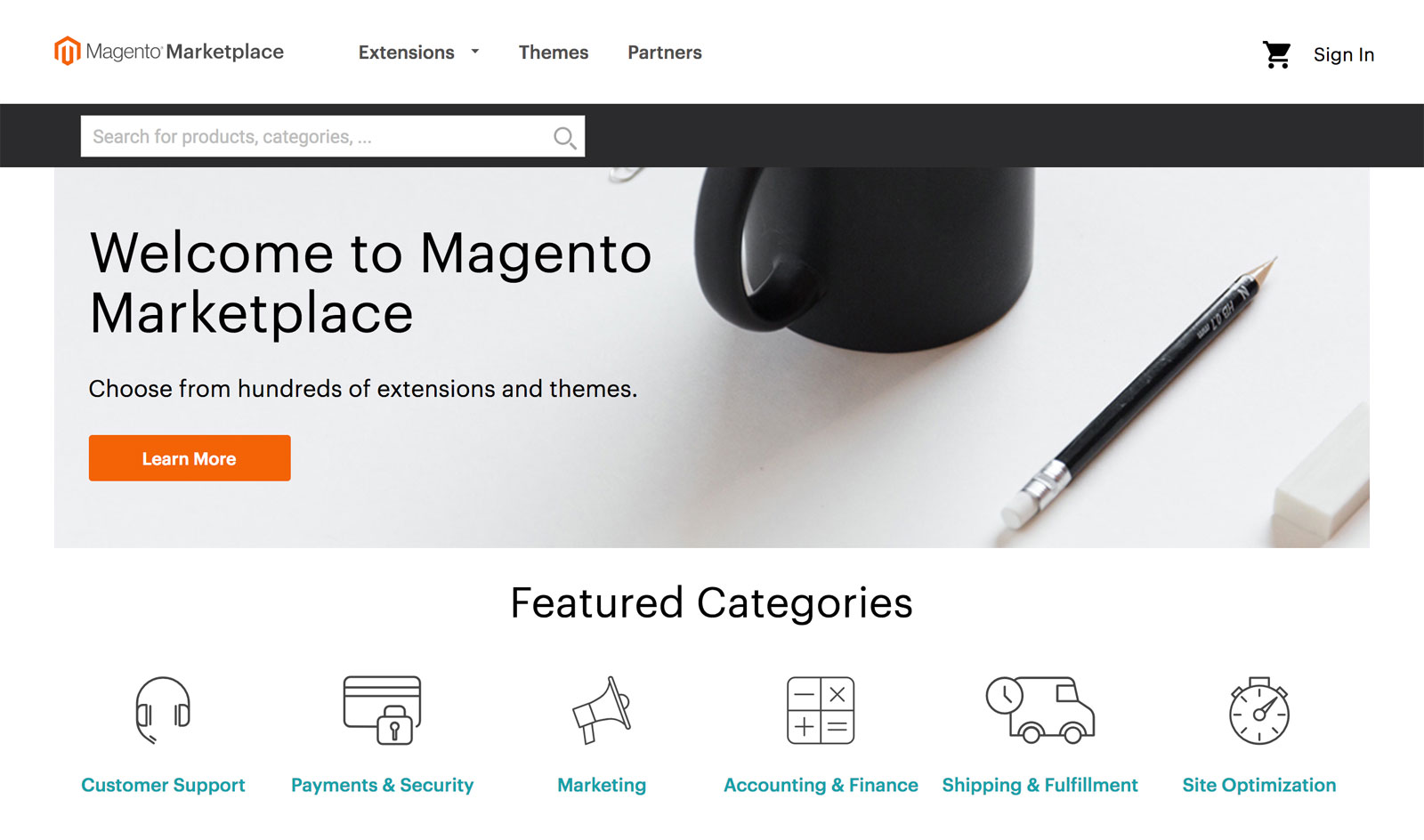 There has been some positive feedback early on from the community. The redesign has resolved some user experience issues, particularly making it easier to identify the vendor of the product as well as whether extensions are compatible with Magento 1 or 2.

The layout has reverted to something more traditional and easier to use. The aesthetics has been scaled back and is not much more than a wireframe in terms of complexity. Previous designs have been heavy on the use of the branch colour orange but there's less of that to see here. The home page is much shorter, better laid out and includes fewer featured products. In replacement, we see the introduction of testimonials from agencies and merchants.

Under the hood, the Marketplace has been rebuilt upon Magento 2 Cloud Edition. This means we know it benefits from a whole suite of tools. First off, the site will be hosted on AWS with an infrastructure managed by Platform.sh that gives flexibility, scalability and the opportunity to employe continuous delivery. Also included in Magento 2 Cloud Edition is Fastly, acting as a CDN and provides advanced edge caching with Varnish. Lastly, New Relic is being used for advanced performance monitoring and error diagnosis. It was also noted that the modern HTTP2 protocol is being used which can help to improved perceived performance. The entire site is served over HTTPS. This is a key requirement in using service workers to provide offline support so that's something that they could look into with our extension!

The lightning-fast product search is provided by Algolia. I met the Algolia team a few years ago at Magento Imagine and I have to say their solution is impressive. Speed has been a key prioritisation during development and it has to be said that it's noticeably faster than the competition. Algolia's technology also powers the filters (or layered navigation) on product listing pages and it performs incredibly well. 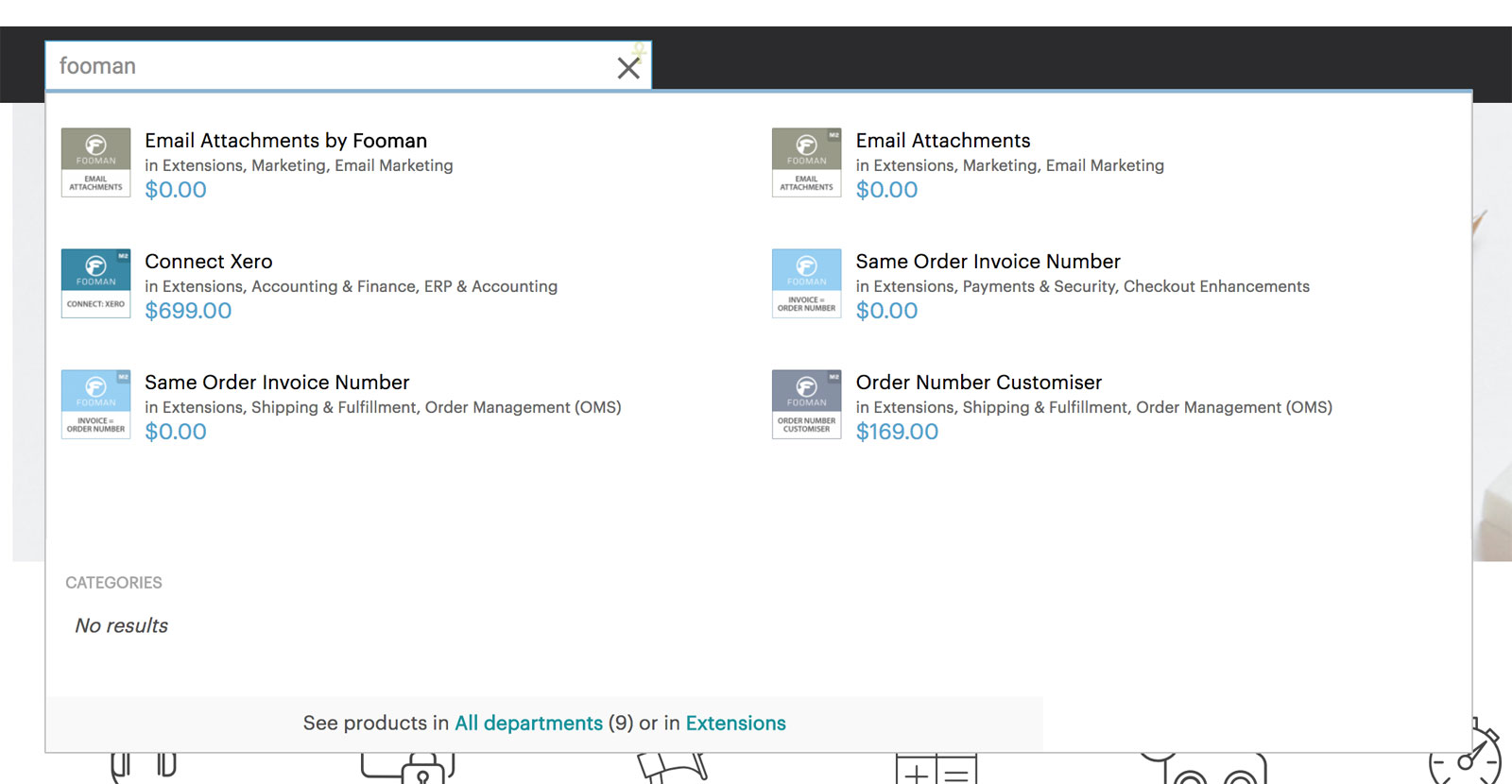 Unfortunately, it appears the primary search functionality is unavailable on smaller devices at this time.

As we move on to reviewing the extension detail page, we may use our Royal Mail extension as an example. 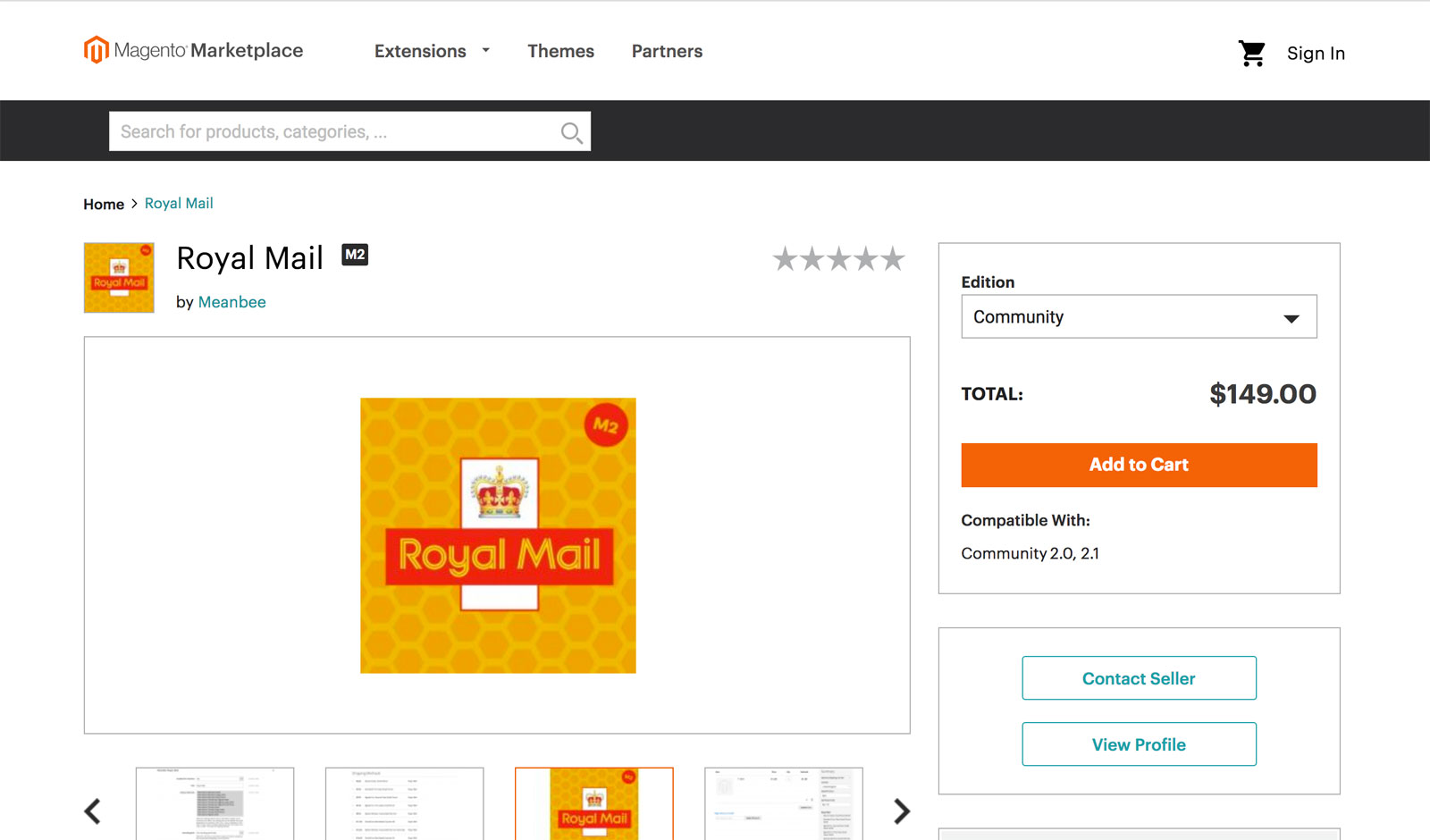 As mentioned, we can see the provider displayed more prominently. We also benefit from the full screen zoom as featured in core Magento 2. Further down the page, the redesign surfaces the Q & A feature. This is achieved through an integration with Bazaar Voice that also supports the reviews functionality.

Interestingly, the approved domain list in Bazaar Voice provide some insight into who has been involved with the development of the site. We can't differentiate between the teams that are responsible for this version of the site or a previous however they include Wagento, Wdevs, Softserve, Aheadworks and Growth Acceleration Partners.

Chief Technical Architect of Magento, Alan Kent, does acknowledge that Magento works with external partners in order to realise their vision more quickly. In this instance, there is a rumours that Aheadworks and possibly other external teams were involved.

but there is still lot of improved. also don't sure it was outsourced to @Aheadworks and then from AW to another company? :)

I do not raise this because I have concern that Magento partners with external agencies. If anything I would encourage Magento to share more about the process and announce the partnerships involved. This sounds like a great opportunity to talk about the strengths of the community so I hope that we hear more. This would be much in the way that we learned about the engagement with Classy Llama for the responsive theme launched in Magento 1. At the same time, it would also be appropriate for Magento's Expert Consulting Group to show off what they can do in partnership with agencies and merchants.

From what we can see, the marketplace functionality is built on top of an Aheadworks extension. To my knowledge, this extension was only ever publicly available for Magento 1 and may have been migrated for this Magento 2 project.

Moving on to the checkout, customers benefit from a Single-Sign on process integrated with account.magento.com. Payments can be made via PayPal (in-context) or Credit/Debit, provided by the built-in Braintree integration in Magento 2.

As with any launch, there's iterations to go through to polish the site to achieve the high quality that we would expect from such an integral part of the ecosystem.

Post-launch niggles include updating the default meta-data entries from their defaults:

We'll leave a performance review for another time, but it's clear there is some work to be done here. One of the challenges with Magento 2 is the amount of javascript that delays time to interactive. On some pages tested, 75% of the requests are for JS assets which accounts for 60% of the page weight.

Running a Google PageSpeed test sets out some clear avenues for exploration:

Using Google's Structured data testing tool, we find that there is an error and a warning which may be responsible for Google not showing pricing information in search results at this time. It also doesn't look like the average review rating score has been added into the structured data.

One final thing I'm concerned about is the maintainability of the site and therefore the cost of changes going forward. Reviewing the CSS, there are a number of tell-tale bad practices like abuse of !important and very long selectors, some with multiple IDs.

The site is built in a mobile first approach with two stylesheets. The second only being loaded if on a larger device. The Luma theme provided in Magento's core is 13,000 lines of CSS long, plus an additional 3,600 for desktop. The Marketplace theme CSS has 22,000 lines on mobile and a further 5,000 on desktop. In my opinion, this is pretty extravagant given the simplicity of the design itself.

Regardless, it's great that Magento's own ecommerce store is now on the latest version of Magento and in time can become a stellar example of what an be done with the platform. What's more, now that Magento earns 30% on extension sales, there's even more of a vested interest in iterating and improving it!